So, I won a tournament yesterday, and that was kind of awesome.

Training:
I’m still in my post crown well, and have not kicked it up again. Just push-ups, tell work, squats, and walking every day.

Fighting:
Quest was a nice little tournament. It was a counted blows at the barrier tournament, which is always a lot of fun. We started out by just issuing challenges at the barrier. I pulled a totally medieval Chivalry move, and challenged the person holding the field to give and receive a single blow without attempting to block it. I let him go first, and he just reached out and tapped me on the shoulder. So I just reached out and tapped him on the head. I was totally prepared to light him up, but he was nice. That sort of thing is a test of courage. You read about things like that all the time in the chronicles.

I had a few good single sword at the barrier fights. Then we got underway. 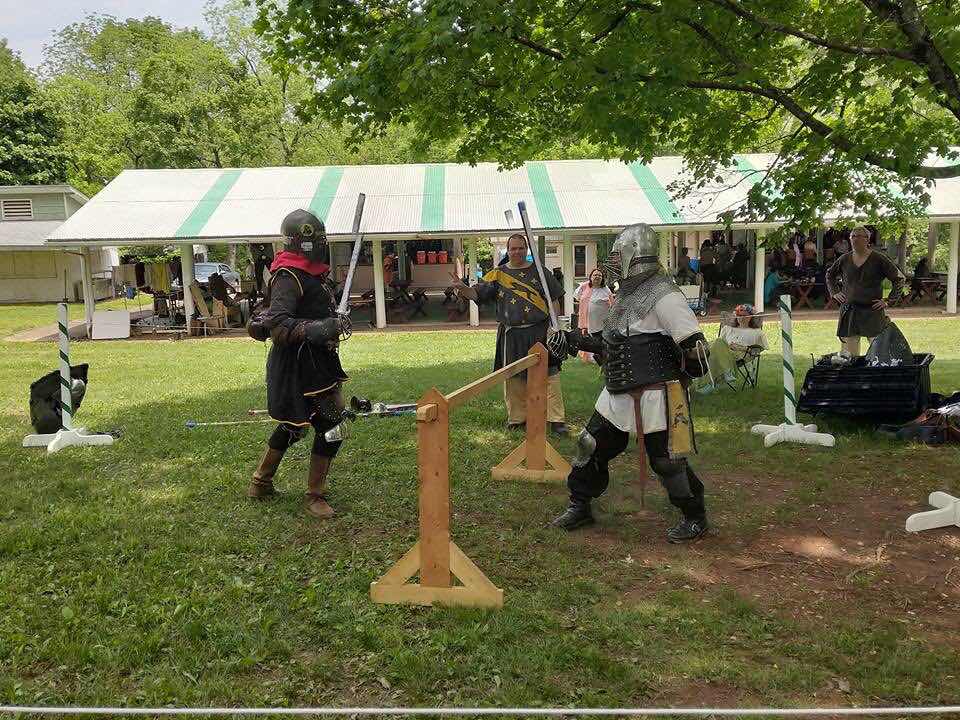 The tournament was counted blows at the barrier. You had to defeat someone best two rounds of three, but each round was to three good blows struck. It was a single elimination format and it was an even tree with only eight fighters, but four of us were knights. I got to fight two knights, and an OTC, so my day was pretty intense.

My first fight was against Gavin. We chose to go out  with swords and bucklers at the barrier. This was an awesome flight. I noticed that he was creating a slot. He was fighting in a high closed form, sort of an East Kingdom a frame, but with the buckler. I do this a lot too. It’s my favorite way to fight with sorting buckler. But he was holding his buckler a little low and every time he moved his sword to throw blow it would open a really big slot for a straight snap. I threw a few other things, but mostly I waited on this and got him with it. I also hit him with one of those dropping leg wraps to the back of the leg. That really shocked him.

Next I had a polearm fight against Manfred. This was just a lot of work and very exhausting. It took us forever. I’m pretty sure I beat him 3-2 then 3-1, or something like that. Most of my pole arm technique won’t work at the barrier, so I was basically just doing downward diagonal strikes to the quarters. And maybe a straight snap or two to the head.  I’m very very very proud of that fight.

Finals was me versus Tanaka, so you knew two things. First it was going to be a show. Second, it was going to be knocked down drag out fun. He gave me first choice, so I chose single swords. He moves so well, and has such a tight defense, that it was really really tough to break him down. We traded a couple of taps, and then for the last blow, and I am really proud of this, I threw into his sword and then as he countered I jumped into his shot, crashed the barrier and threw a wrap. It caught him off guard and won the fight. When it was his choice, he said “we are going to do a real hard-core New Jersey beat down.” This meant  maces with left hands clutching the barrier. I blocked his first shot and then saw a beautiful slot open right on his chin. I just started punching him in the face with the head of my mace. One, two, three.

There are 61 days until Pennsic. My next time in armor will be Tuesday at McCarren Park.

I'm getting close to that 100th Crown.

To those of you who read this blog a lot, I'm sorry I haven't been writing in it much. At first it was because I was not fighting as much, taking time off to play Lady Bracknell in The Importance of Being Earnest. After that it was because I did not feel like writing about my training.

I trained for this crown in much the same way I had the last two. My daily routine includes walking between 8,000 and 12,000 steps most days (my fit bit broke. I use my phone to track steps, which under counts), plus 100 strikes on the pell, 50 push ups and 50 squats. Since I added the pell work last august, I have not missed a day. Once again, I added running to my routine as Crown approached. I ran five times a week in the 6 weeks approaching Crown, except the last one. I did not fight nearly as much as I would like (I never do), but I made practices at Nutley, Iron Bog, Midland Vale and Aedult Swim, plus events in Tourney of the Daffodils, Mudthaw, and Balfar's Challenge. I went to semis in Mudthaw and I won Daffodils, so I was doing ok.

Crown was in Halifax. Every time I've gone to a crown in Halifax, I've had a good time. It's a fantastic city! I highly recommend it. We stayed at the Hearthstone Inn in Hamilton, which was nice, with a Victorian theme and a good pub.

This Crown was great, but I really need to win another of these things. Randal, who's 5 years older than I am, was only one blow away from winning, which is encouraging. I ended up fighting nearly everyone I prepared for: Avaldr, Marcus, Zippy, and Wilhelm. I also fought Mathew McGuyver, Reinhardt, and one other (I cannot remember the name of my second round opponent). There were 22 participants in total. The list was double elimination and rounds were being fought best two out of three. This included the semi-final round, which meant that the fighter out of the winner's list could win fighting only two fights, but the fighter out of the losers list had to win four, and could end up fighting six fights. Yikes!

I thought the format would be hard on me. Most of my rounds went three fights but my endurance was good enough that I really never felt that tired, and certainly no more so than my opponents. Well, maybe I did against Reinhardt. I lost to Avaldr in the third round, and to Prince Wilhelm in the semi-finals. The format actually helped me out, since I lost my first fight twice while going on to win the round. I was particularly proud of three things. The first was my one win over Avaldr, even though he won the round. He'd beaten me in our first fight, but I killed him with a hook-thrust in the second. Next was my third fight against Reinhardt. He is really good. He fights with a fairly small center grip scutum, and he blocks his legs with a window parry. I killed him with a foot stomp and thrust. I didn't sell it really big. I shrugged my right shoulder, took a half step, stomped my foot and dipped my shoulder, then thrust him in the face. Third was my final fight against Marcus. I had been working on King Brennan's off-side leg shot a lot lately. I threw it at Marcus in our second fight and noticed he picked it up early and cocked the point of his kite over to cover his off-side leg, so in our third fight I faked it by throwing the setup (a cock that resembles a snap to draw the shield up and to the on-side) took a slight step off line to my left, then stepped back to my right and threw a leg wrap.

All my fights were excellent. I had really hard rounds the further I progressed. I never lost my focus. I did not kill myself by getting lazy or silly or playing with my food. I Went to semi finals and lost two straight to Wilhelm. Those were both great fights, a lot of fun. I had been beating Wilhelm in most of our encounters the past three years, and it was interesting to see what he'd done to respond. First, he's lost about 50 pounds. Second, he seemed much more focused and precise. When I tried the set up for the leg stomp it was obvious he was ready, so I never threw it. He got me with a straight body shot in our first fight. After he'd taken my leg in our second fight, I threw the same thing I'd killed him with at Roses in November, coming up high on my knees and then, as he stepped in, sitting down and throwing a body shot--an old William of Houghton technique. He obviously remembered it, because he this time as he stepped in and I threw the shot, he brought his sword forward in a guard to block mine, then he killed me the way I would have, with a top-edge hook and a snap.

If you are on FaceBook, you can see the semi-finals HERE.

So here was the funniest thing coming out of crown. At Balfar's Challenge two weeks before I had spent a lot of time watching Zippy and Avaldr, as they were obviously training very hard. They were the last two knights to leave the field from pickups. I left after somebody hit me in the calf and I decided not pushing the injury was smart. I was fighting with my Crusader pot helm because Cet was doing a repair to my conical. My pot helm is heavy, not very comfortable, is super tall, and has lousy visibility, so I only get so much out of using it (mostly aesthetic pride). Avaldr was using a center grip kite, the first time I'd ever seen him use one. It closed off his biggest window, but was obviously a bit easier to move around. At Crown, Avaldr was back to using his regular strapped kite. Afterward I ran into him and Nomi leaving, and they were carrying his center grip kite shield. I said to him "I spent the last two weeks preparing to fight your center grip because I saw you training with it at Balfar's." He said, "Yeah, that's why I was using it. I figured you were doing the same thing with your other helm." I replied, "I wasn't, but thank's for the compliment!" It's really funny to know that we were indeed scouting each other.

There are 72 days until Pennsic War. My next time in armor will be Sunday at Viking Day in Brooklyn.

MONETIZATION
In an effort to monetize this blog, I'm including this link to a riveted mail shirt: