Spring Break and the Count of Foix

REHAB
Rehab is going great. My elbow is responding well to the Indian clubs and usually it doesn’t hurt at all.

WORKOUTS
I was on Spring Break and traveled the whole time (ten days) I was worried that I wouldn’t get to work out much. But I did. Circus Circus had a gym, so we used that the first Saturday. There is a par course near my mom’s house in Fallon that Hanna and I ran that Monday. Wednesday we went to a gym I use in Palo Alto. We walked all over San Francisco on Thursday. Friday we didn’t do anything but stretch, but I was in the saddle for four hours on Saturday (which is a great workout—see below). Travelling meant no working out on Monday but today I went on a 3.5 mile run.

FIGHTING
Are you kidding me? I was on spring break. I was traveling the whole time--California and Nevada. I tried to get to BART on Thursday night, but sweetie was having none of it, and since I fight for her anyway she gets her way. However, in some ways I was more knightly last week than at almost any other time, because…..

GASTON PHOEBUS!!
It is a little known fact, and one mostly ignored in the SCA, that knights in the middle ages didn’t spend all that much time in armor. Yes, there were the great knights, the ones we learn about like William Marshal and Bayard and Ulrich von Liechtenstein, who were famous for their deeds of arms, and we know of the exploits of Richard Cour de Lion and Edward, the Black Prince, and of Charny and John Hawkwood in war—but these are the exceptions. The SCA, being a postmodern version of a Hollywood image of a Victorian concept of a romantic middle ages that never actually existed, isn’t really interested in any sort of historical truth (though the 14th Century Mafia does try to drag us there kicking and screaming). Our knights are romantic heroes, based on Arthur and Lancelot and Aragorn—or any of the aforementioned warriors—and those guys fought. The knight in shining armor is the paradigm we are trying to create. The truth of the matter is that most knights spent most of their time seeing to their estates, judging which peasant got the cow in a dispute, distributing justice and running the family farm.
There is one activity, however, that nearly every knight participated in, usually several times a year. It did offer some training for war, especially in horsemanship but also in tactics. It was, in fact, the primary recreational pursuit of the medieval nobility—just as armored combat is the primary recreational pursuit of knights in the SCA.

In the middle ages knights were primarily hunters.

Oh, sure, their job was to be warriors. They got their wealth by being both the army and the police force for their liege. But in truth that didn’t come up as often as we like to think. Many knights (in some centuries most) never saw a battle. But they hunted all the time. Hunting is what knights did—their primary job and their main joy.

My own study of Medieval hunting, especially of the most famous medieval hunter Gaston Phoebus, the Count of Foix, started about the time I won Western Crown. One of my Dukes took me on a falconry hunt the morning after the tournament. It was kind of anti-climactic, but it was still good to walk through the woods with a red-tail hawk and try to scare up some game. I read a lot. I got the book of plates from Phoebus’ book *le Livre de Chasse* (I’ve never been able to afford one of the facsimile versions). I devoured John Cummins’ *The Hound and the Hawk.* My grandfather gave me one of the Stanford Press editions of *The Art of Falconry* by Frederick II, and I read the whole thing. Eventually I got a copy of the first English translation of Phoebus, *The Master of the Game*. This led me to read other, modern stuff about hunting, from Capstick and Roosevelt to Michael Pollan’s chapter on hunting from *The Omnivore’s Dilemma, * which was excerpted in the New York Times Magazine. And eventually that led me to start hunting myself. I am a modern hunter—I hunt deer with a rifle or shot gun. I take a bow into the woods but have never shot anything with it. I’ve gone duck and turkey and pheasant hunting as well. One of my dreams has always been to hunt boar with a spear (one of my men at arms has done this in Florida, and I may go down and do it myself next year). Another has been to go on a real par force hunt on horseback.

I have advocated for more hunting events in the SCA for a long time. The Boars Hunt event, which is held in Beacon’s Gate in the West and also here in the East, has always been one of my favorites. When Mistress Tangwystal first told me about the “period picnic,” I told her that she should make it a hunting event, since the picture she was using for documentation came from le Livre de Chase. I’ve been suggesting a drag hunt in the West Kingdom for some time. So when I heard that Canale was going to do a Gaston Phoebus event I was hooked. Thankfully, it fell at the end of my spring break. I would go visit mom, hang in Nevada and Cali for a week, and then go to Gaston Phoebus.

The West has a large and active equestrian community. They do a lot of stuff, from light jousting and brouhards to dressage and trail rides. Most of the EQ people in the West live in Cynagua, where there is more land for horses than in the Bay Area. Duke Henrik, both the first Duke and the first SCA equestrian, lives in the West, as do a number of great riders. They put together a really neat event. It was totally SCA, with a lot of mock-hunting games, but it was all done on horseback and it was a lot of fun.

It was on a beautiful site, Pacheco State Park, right at the top of Pacheco Pass. This is a hilly site with a lot of horse trails where they’ve held Mists/Cynagua war a few times. The autocrat pointed out that there were representations of nearly every type of game we would be pretending to hunt in the park: wild pigs, elk, rabbits, even some badgers. There were no river otters, but there are some in California, so maybe we just didn’t see any. There were a number of stations with various hunting games based on the illustrations from le Livre de Chasse. There were rabbits, Otters, a badger, a wolf, a pig (all stuffed) plus a hart and a roebuck (people on horseback). The rabbits were bashed with sticks, the wolf roped and hanged, and the otters, pig and badger speared. I didn’t do all of the games, but I did get some great hits on the otters. Sweetie was cold and tired so we didn’t stay for the picnic.

I had arranged to rent a horse from someone, but she couldn’t bring it, so I rented from the wrangler instead. He gave me a good broke quarter horse named Bonanza. He was a bit of a pill, fighting his bit all day, and balked whenever I wanted to ride away from camp. He tried to throw me once or twice, but without any real heart in it. I manged to keep him under control, and most of the time he was a joy. What he really wanted to do was run, and we did do a bit of that. What I was really there for was the par force hunt. Helga, one of the best riders in the kingdom, was playing the roebuck for the walk-trot hunt. I didn’t feel comfortable enough on that horse for the canter hunt, but the horse had other ideas and cantering was in his game plan. WE chased her all over the hillside until Henrik finally “killed” her with a sword. It was a lot of fun. The best part of it was that Helga said I was a very good rider.

No, it wasn’t a real par force hunt. That will come later—Connor and Siobhan have invited me on one of their hunts in Red Rock, near Reno. But it was a great day in the saddle pretending I was with the Count of Foix. 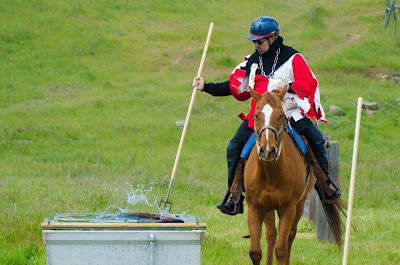 Forgot to do my rehab this morning.

Haven't fought since Monday (there was a monthly regional in Philly, but I couldnt' swing it).

Had a GREAT workout on Monday, with weights, stretching, and aerobics, plus the Indian clubs that morning. Yesterday I waled 5.89 miles, from 138th to the F train stop at 57th and 6th, snaking my way through Central Park along the way. The City's back yard in Spring! *sigh*

The real reason I'm posting: here is video of that fight between Alden and Brand, like I said, it was truly epic!

Well, I have recovered from March Crown. I took a couple of days off from working out and my elbow and shoulder feel good.

REHAB
Elbow is really unchanged. It is a bit stiff, occasionally sore, but not debilitating. I have a feeling it is going to feel like this for several months. I have been doing my PT and it seems to help. If I drop it it hurts more. Seems like it is working more or less fine.

WORKOUTS
I didn't get back on the exercise bandwagon till Friday, when I hiked from work, across the Brooklyn Bridge, and over to the Jay Street station. Not a huge hike but a good workout. Saturday I did a "Workout of the Day" workout and now, two days later, my quads are *still* burning! Ouch! Today I did clubs in the morning and I'm about to go to the gym.

FIGHTING
In the best laid plans department, nobody in town wanted to go to the Moose Lodge practice in Jersey, and I didn't want to spend the money on a zipcar just for me, so I didn't fight yesterday and, at this point, may not fight until after Gaston Phoebus.

However! Ron directed me to a video of my fight with Alden, which, as I've indiated, at first made me feel great and later made me feel like a fool. Looking at the video, the fool part was the right response!

Here is what Ron had to say about it: "I watched your fight with Alden; You let him control the fight, You moved you shield around way more than you needed to reacting the second you saw something, You relied way too much on thrusts, You were way too squared up. That is what I saw." That about sums it up for me, the video just points it out even more clearly. Alden had me from the lay-on. I needed to tighten my defense, be more precise, use more cuts, and not play his game. Duke Reinmar posted the video, and he's got some other good stuff on his YouTube feed.
Posted by M.A. Cramer/Valgard at 3:10 PM 1 comment: